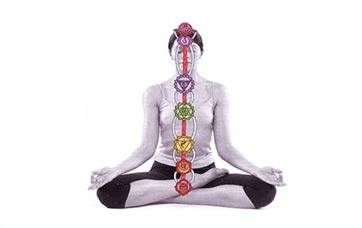 “I know no greater value than the one necessary to look within yourself.”
― Osho

The Kundalini is the Primal Life Force for all Creation that is “stored” and latent at the base of the spine. We are born naturally with this energy in which it awaits activation in later years. The aspirations for many who do chakra meditations along with yoga traditions is to clear the energy centres to allow the Universal Energy of the Kundalini to flow naturally and unhindered. The energy moves upward from the root chakra along the spinal column to the crown. It then showers up and out within the auric layers in an ovular field and cycles back to the body – the process continues like a huge circuit. It is the foundation and basis in the Cosmic Consciousness that produces various degrees of enlightenment. The awareness of the Kundalini is a spiritual step in transforming human consciousness, an emergence to our natural state of Being One with the cosmos. The mystical mind is forever changed by the Kundalini awakening.

Obviously developing an understanding of the eternal absolute means developing knowledge on a number of psychological issues which is why there are several primary Chakras, each associated with a particular aspect of universal knowledge. The first Chakra is found at the base of the spine and is believed to be related to the survival aspects. As we ascend up the Chakras we achieve a higher level of consciousness to the point where we voluntarily release ourselves from the bondage of the greed, hate and anger that was originally brought about by our confused state of mind. When we reach the very top we begin to understand our connectivity to all things and realise the purpose of our existence.

The seven main chakras are visualised as a series of lotus flowers ascending the spine to the crown of the head. Each lotus has a specific number of petals, and each chakra has an associated colour, element(s), and source(s) of energy. As the chakras progress from the lowest to the highest, they govern increasingly spiritual functions. As a person becomes more spiritually aware, he or she becomes in touch with the higher chakras one by one, while the lowest chakra relates only to the most basic physical concerns.